China’s firing drills using land-based missiles and fighter jets around six zones encircling Taiwan are all aimed at cutting off the island, warning ships and aircraft against operating in the area.

China began aggressive military exercises after US House of Representatives Speaker Nancy Pelosi’s visit that Beijing had opposed. The assault around these zones was intended to create a blockade around key shipping ports: Kaohsiung, Taichung, Taipei, Keelung, Suao and Hualien around the island. 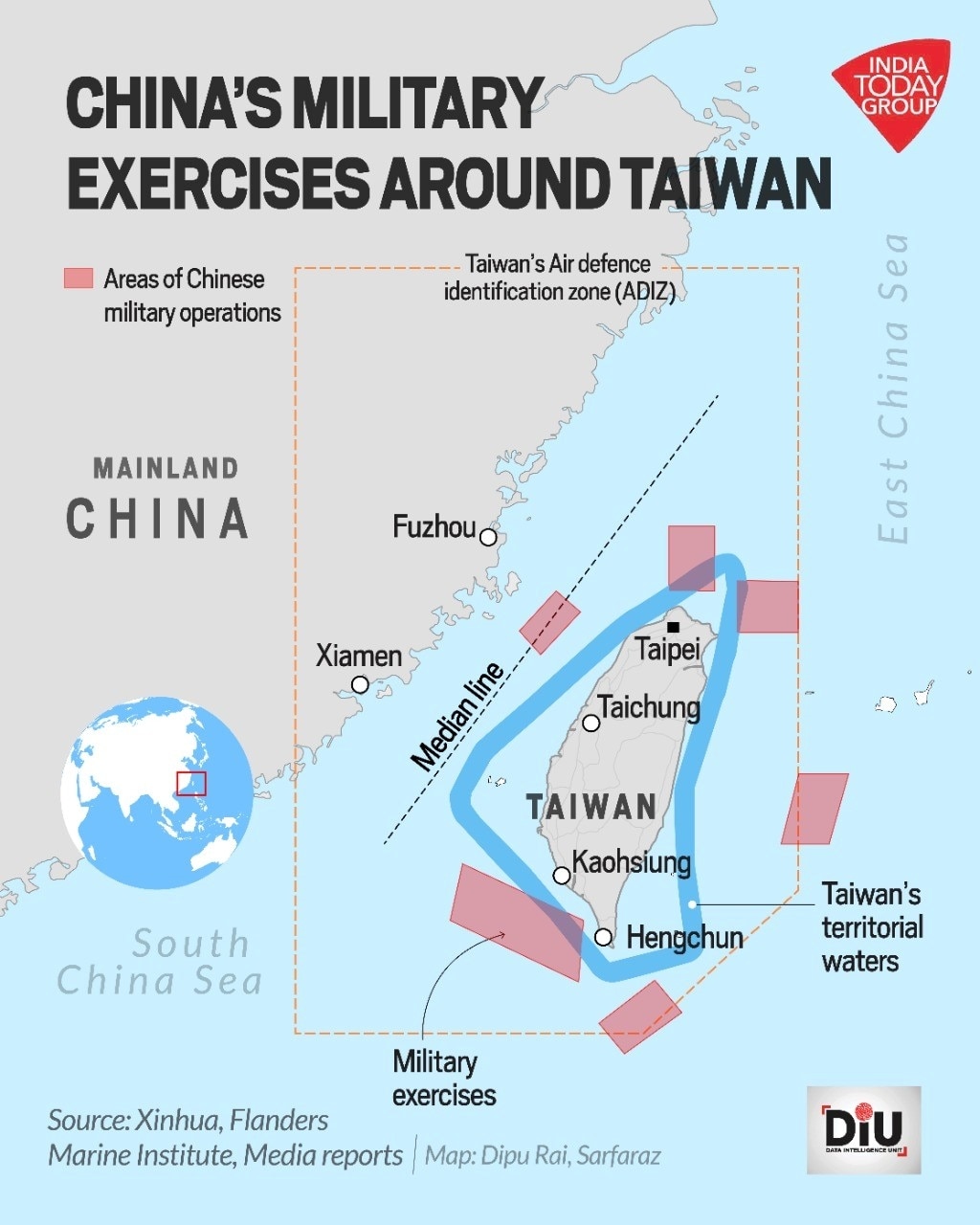 The exercises are being dubbed as the biggest by China across the Taiwan Strait separating the two countries. The zone in which the fire drills are happening is barely 20 kms away from Taiwan’s coastline.

In their bid to create a blockade, the Chinese have been using the J-20 stealth fighter jets, H-6K bombers, J-11 fighter jets, Type 052D destroyer, Type 056A corvette and DF-11 short-range ballistic missiles.

According to Chinese state media, DF-17 hypersonic missiles have also been deployed.

The deployment in the seas includes two Chinese aircraft carriers among other war ships. The Chinese PLA’s Eastern Theatre Command based in Nanjing said that it had conducted long-range, live-fire training in the Taiwan Strait, state broadcaster CCTV reported, as part of planned military exercises around the island.Taiwan claimed on Friday that 68 Chinese fighter aircraft and 13 vessels violated their space.

Not just the two aircraft carriers that can be used for launching air strikes, the Chinese have encircled Taiwan, with the aim of cutting off at least half a dozen ports in the country. These ports are critical for Taiwan’s trade. This includes Taipei, the biggest container facility in the north with nearly 3000 ships frequenting the port every year. Other ports are crucial for trade in chemicals, sugar, aluminum, fertilizers, oil, rice, packaged food, among other critical commodities.

While Taiwan is exerting pressure, there is also a US navy deployment east of the island. There are four US warships, including a nuclear-powered aircraft carrier that is supported by two other warships.

In response to China, Taiwan has been carrying out exercises to combat air raids. In terms of military capabilities, Taiwan is no match for China, but with help from the US, it hopes of taking on the mighty Chinese military in case of a flare-up.

When it comes to airpower, China has over 4000 aircraft while Taiwan only a little over 800. China’s combat fleet is far superior to what Taiwan has. China outnumbers Taiwan when it comes to tanks, armoured vehicles or artillery.

Coming to maritime power once again, the Chinese navy has far more firepower. China has over 700 ships while Taiwan has under 100.

DoorDash has confirmed that it has teamed up with Facebook Marketplace to make that awkward exchange of items with a...

sponsored .bit (did.id) has raised $13 million to build a cross-chain decentralized identity protocol. The Series A round, completed one...

While my trading techniques can work for anyone, they do especially well with small accountsTake Mariana, for instance.Back in December...