Worker burnout is real. Reports suggest that work-related chronic stress could be costing businesses up to $190 billion annually in reduced output and sick days, not to mention the much-discussed “great resignation” where workers are jumping ship in search of a greater work-life balance. In 2019, the World Health Organization (WHO) declared burnout an “occupational phenomenon,” adding it to its International Classification of Diseases.

This is a problem that Ambr is setting out solve, with a platform that promises to address worker burnout preventatively. The company is demoing its wares at TC Disrupt this week as part of the Battlefield 200, and we caught up with the founders before and during the event to take a closer look at an early iteration of its product.

Ambr was founded in February this year by Zoe Stones, Steph Newton, and Jamie Wood, a trio of former Uber managers who witnessed the impact of worker burnout first-hand.

“Burnout was a problem across our teams, and as managers and individuals, we didn’t know what to do to prevent it,” chief product officer Wood explained. “We researched the causes of burnout, and learnt that burnout is primarily the result of workplace factors like poor relationships, unmanageable workloads, poor time boundaries and a lack of control.”

The founders, who are all based in London, are in the process of making their first hires and raising a pre-seed round of funding, which it said it expects to close “in the coming weeks.”

Ambr’s technology currently relies on self-reported check-in data from Slack, with a configurable survey-like system for gathering feedback from workers.

But while this kind of in-app survey functionality isn’t exactly unique, the company is in the process of developing additional tools to proactively figure out whether a workforce is at a higher risk of hitting burnout. This includes using natural language processing (NLP) to identify whether workers are happy to talk about what they’re doing outside of work, or whether they always talk shop.

This will mean using data from an open-ended question in the daily Slack check-in survey, which asks “What’s on your mind today? Share any work or non-work topics.” The idea here is that if a worker only ever mentions work stuff, then they may be at risk of burnout, though in reality it’s probably an imperfect indication given that people are less inclined to talk about personal things with an automated survey, than they would be with a human work colleague.

While all NLP analysis is apparently anonymized, with the resulting aggregated data only accessible to management, it would be better applied to more organic conversations within public Slack channels or Zoom calls, though this would obviously raise greater privacy concerns even if the data is anonymized.

At any rate, this gives some indication as to the types of things that Ambr are working on, as it looks to automate the process of assessing burnout risk.

“We’re investigating other features and integrations in the future that may leverage NLP, but nothing yet on our product roadmap,” CEO Zoe Stones said.

Elsewhere, the company is exploring using anonymized data from other workplace tools such as email and calendar software. This could work in a number of ways, for example it could detect whether someone is emailing excessively in the evening or on weekends, or perhaps they have wall-to-wall meetings for 90% of the week — a scenario that could force someone to work far more than their allotted hours to keep their head above water.

Ultimately, this gives companies valuable data on work culture, helping them address smaller issues before they escalate into full-blown problems. 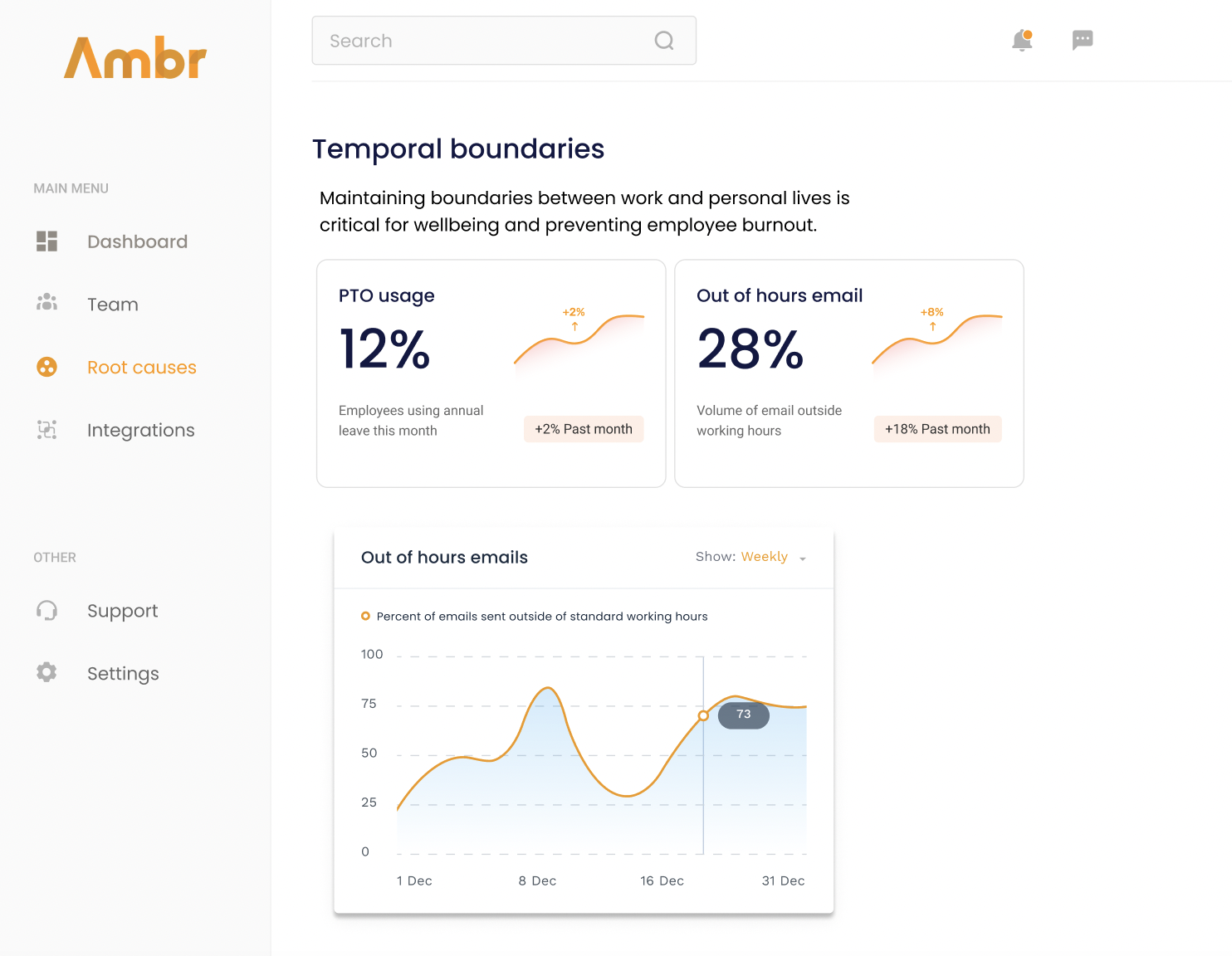 But spotting risk factors is just one element of this. Ambr is also working on “nudges” that serve workers gentle reminders inside their core workplace tools, perhaps suggesting ways they could cut down on out-of-hours work.

“Initially, we’re delivering nudges through Slack, but we plan to rapidly expand into using Microsoft Teams and also a Google Workspace add-on,” Wood explained. “It is important to highlight that nudges are used sparingly — only when we think they can have a meaningful positive impact on behaviour. Our principle is nudges, not nags.”

Ambr’s ethos can perhaps be juxtaposed against the myriad meditative, mental health, and wellbeing apps that have raised bucketloads of cash in recent years. Indeed, Ambr’s approach is more along the lines of, “why fix something, when you can stop it from happening in the first place?”

“We are beginning to transition to a world of work where employees are demanding more from their employers — Ambr will enable companies to adapt to this new reality, particularly as hybrid and remote working becomes the norm and as more Gen-Zers enter the workforce in the coming years,” Wood said.

Beyond the usual health and well-being players which, according to Wood, typically have lower adoption rates given that they’re not integrated into workers’ day-to-day tools, there are a number of startups with a similar approach to Ambr. These include Humu, which uses nudges to encourage behavioural changes, though it’s not specifically focused on countering burnout. And then there is Quan, which issues wellbeing recommendations to users based on self-reported assessments.

Ambr’s closed beta went live in June this year, and it said that it has been gradually onboarding new customers from its waitlist, including startups and “later-stage growth companies” globally. It expects to launch publicly in early 2023.

In terms of pricing, Ambr is pursuing a standard SaaS model, with customers paying a monthly per-employee fee.

With HQ half a world away, how do Xero’s Canadian hubs stay connected?