Propaganda videos showing how happily Uyghurs are living under the leadership of the Chinese Communist Party (CCP) are repeatedly being shared using fake accounts on YouTube. However, the way the ethnic community has been surviving in China is quite contrary to what the recent videos are all about.

Soon after the July 5 riots that broke out within Urumqi in 2009 between the Han community and the Uyghurs, China decided to gradually eradicate the very existence of the group, which had already become an ethnic minority in their own land, by bringing into existence a string of policies to downgrade their ease of living, including serious human rights violations such as forced labour and forced sterilisation.

Quite identical to what followed after the Tibetan unrest of 2008, detention centres were built on a massive scale for Uyghurs, which were yet again termed “voluntary re-education camps”. The sole aim of the camp, as referred to by the CCP, is to forestall any extremist behaviour within the ethnic group.

The things that constitute a hint of possible radical behaviour could include just anything from not shaving your beard to not using a phone for a considerably longer time period; examples of which have already been revealed publicly by an anonymous individual through a leaked database consisting of several photographs of detainees stuck within the detention centres without any sensible reason.

In order to turn the masses on one’s side, the utmost thing necessary is to control the flow of information and manipulate it that’s basically how a communist regime like that in China thrives. With changing times, individuals and entities across the world have started exploiting the interactive nature of the internet, which is what “participatory propaganda” is in simpler terms.

As for the Uyghurs, the CCP came up with two different strategies: each for within and outside China. The strategy is to demean Uyghurs within whilst veneering their situation on western platforms so as to baffle the rest of the world and further distort the available data on what’s actually going on in Xinjiang.

India Today’s Open-Source Investigation (OSINT) team delved into YouTube and found traces of a subtle campaign of bogus accounts professing Uyghurs to be living a “happy” and “unrestrained” life.

A series of scripted videos show people belonging to the Uyghur ethnicity claiming that they are leading happy lives and also calling out the United States and western forces to stop slandering the image of Xinjiang.

One of the accounts created back in 2020 sharing “happy” Uyghurs’ videos.

On pasting the title of any of the posted videos in the search bar, we get more such identical accounts with exactly the same headline as posted by the earlier account, which concludes the probable use of an assigned format in disseminating the videos. Interestingly, the hashtags used by the accounts were also the same, namely # and #UyghurHumanRights. 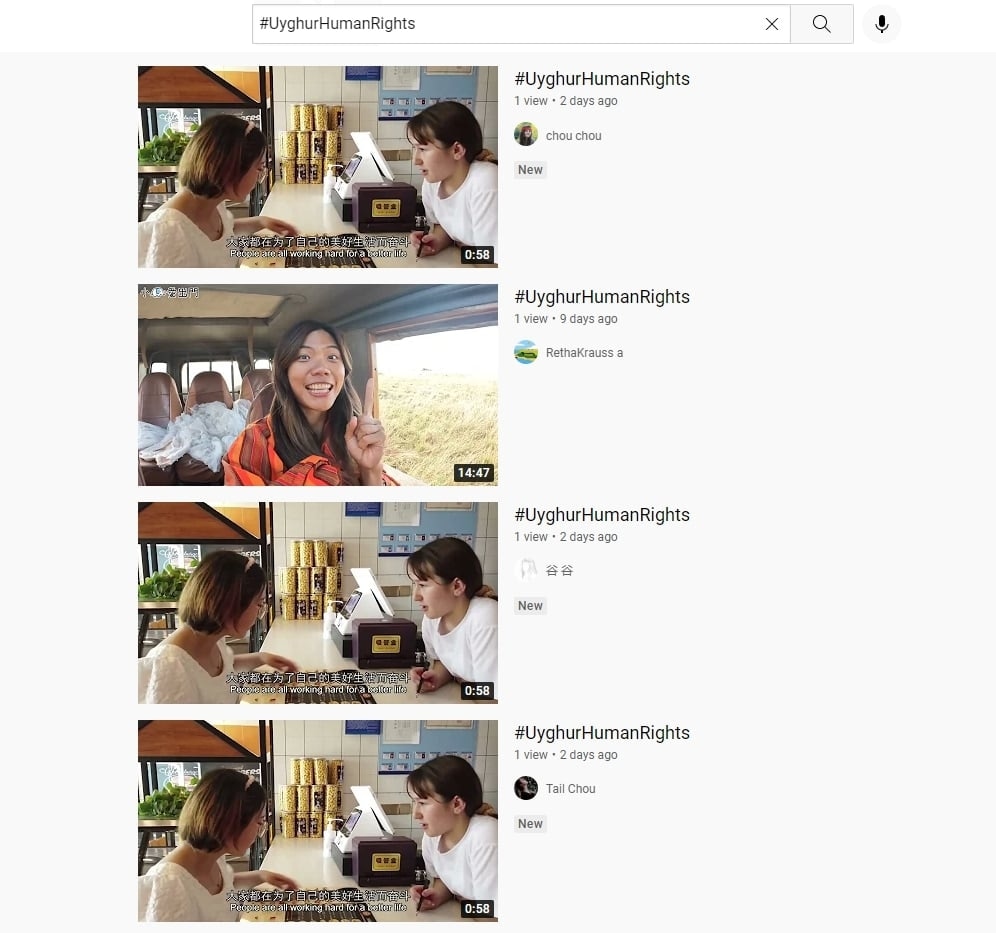 Searching one of the video titles gave closely related results.

On looking closely, nearly all the videos start off and end with the same statement attacking the West. Almost all individuals gave the same statement attacking the West.

Yet another video that caught our attention was that of a Taiwanese traveler who goes by the username “AbuNowNow” which allegedly shows the Kashgar region of Xinjiang which has been possibly vacated on the orders of the CCP, wherein there is a chart attached inside an abandoned house in both the Chinese and Uyghur languages. A propaganda chart in Uyghur and Chinese titled “Main Manifestations of Religious Extremism”.

The chart titled, ‘Main Manifestations of Religious Extremism’, has 22 points on what Islam purportedly teaches its followers, including disobeying the CCP. We were able to roughly translate all of the points using Google translate, images of which we are sharing below. 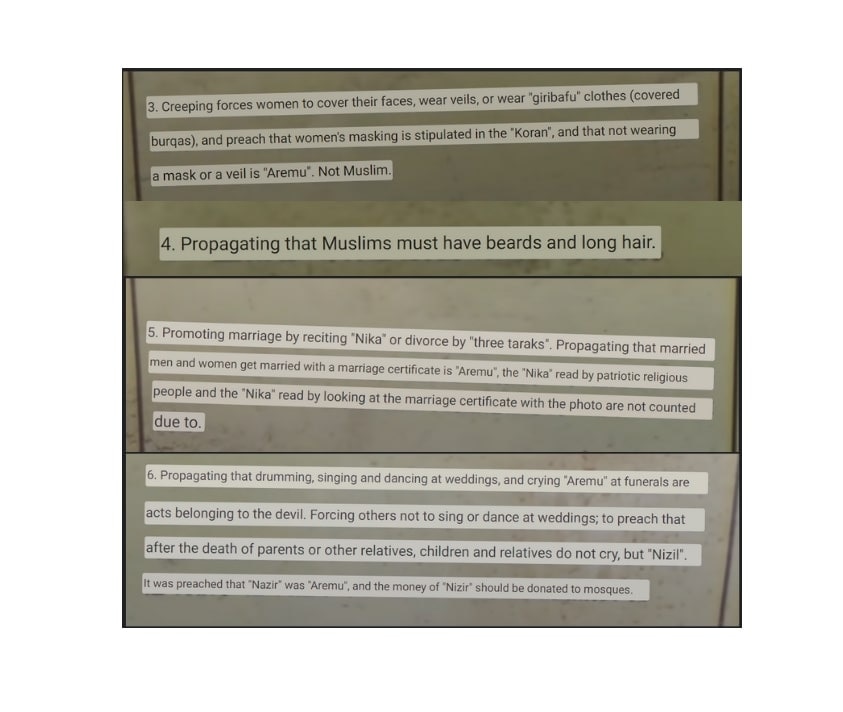 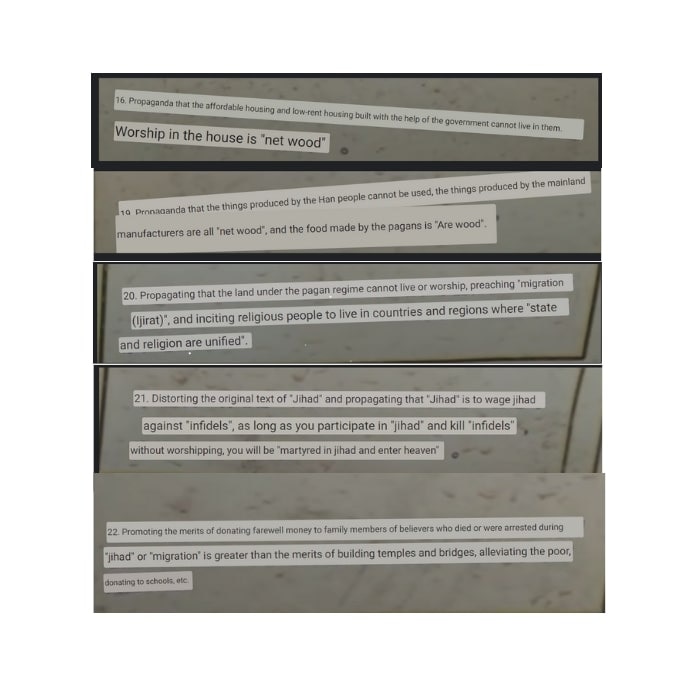 WHAT THE UYGHURS HAVE TO SAY

We reached out to Campaign for Uyghurs, an organisation advocating for the democratic rights and freedom of the Uyghur people present in Xinjiang and around the world. Arslan Hidayat, the programme manager of the organisation, shared his insight on the subject via email.

Q: Do you think that these videos are from genuine residents of Xinjiang? If so, then why do the individuals seem to follow identical scripts with either loud or little to no facial expressions?

A: The residents themselves appear to be from East Turkistan. However, they have been forced to read off a script, hence why the speech is pretty much the same in every video.

Q: Has your organisation seen such Uyghur propaganda charts before? What could possibly be the intention behind making such charts and do the mentioned teachings hold the truth in actuality?

A: In summary, the chart seems to demonise Islam and its teachings, depicting anyone calling Islam as radical and that the CCP is a true friend of the Uyghurs.

Q: What are your views on the funding of the Uyghur Tribunal? Does it really have links to the World Uyghur Congress as claimed in the footage?

A: The Uyghur tribunal is an independent tribunal. None of the lawyers was paid and so they could not be influenced. Yes, the money raised did come from Uyghurs, just like in any court case. If you want to take someone, an entity or a government, to court for crimes or an injustice they’ve committed, obviously those who were wronged would take them to court. Beyond that, claims made about the WUC by the Chinese regime are propaganda and disinformation made to try and discredit Uyghurs and our movement for human rights.