Prime Minister Narendra Modi expressed condolences to the families of those who have lost their lives due to the floods in Pakistan. Around 1,061 people died in floods, and 1,343 were left injured.

Saddened to see the devastation caused by the floods in Pakistan. We extend our heartfelt condolences to the families of the victims, the injured and all those affected by this natural calamity and hope for an early restoration of normalcy.

“We extend our heartfelt condolences to the families of the victims, the injured and all those affected by this natural calamity,” said PM Modi in a tweet on Monday.

Pakistan is facing one of the worst floods as the country witnesses the highest rainfall in the last three decades, which is reported to have been 190 per cent higher. Around 33 million people in 116 districts have been affected in the country.

The agriculture sector in Pakistan is likely to be affected the most, as two million acres of agricultural land were impacted, while more than seven lakh livestock went missing in the floods. 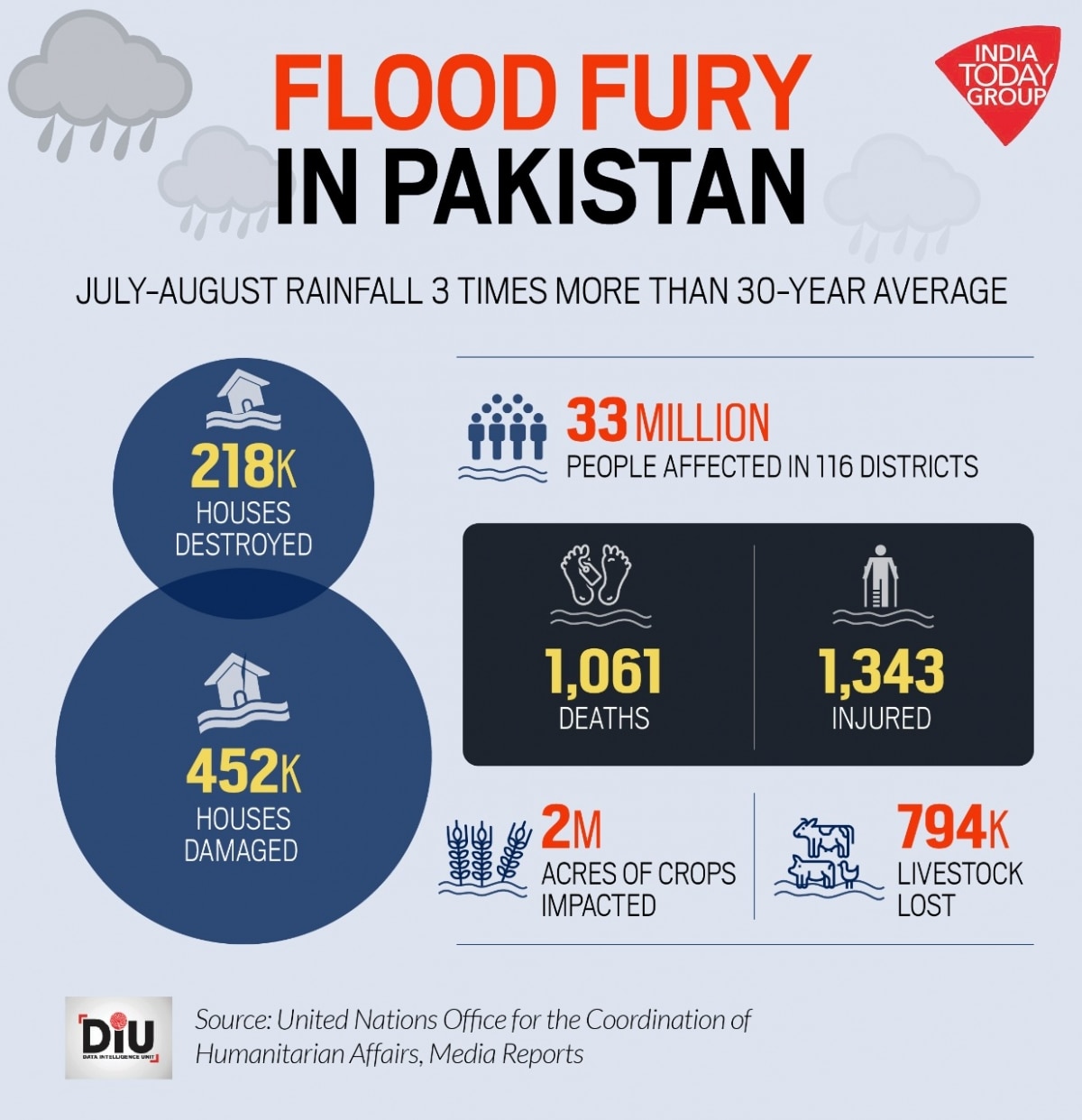 The annual agricultural growth could reportedly dwindle from 6 per cent to 3 per cent. Pakistan’s government may consider importing vegetables and edible oil from India.

Floods in Pakistan have doubled the trouble for the government that was taking measures to tackle the challenges of the country’s economy.

Pakistan’s finance minister, Miftah Ismail, has sought more foreign aid to pull the country out of the damage caused by the flood. Minister Miftah Ismail predicted Pakistan’s loss to be nearly 10 billion dollars due to the deluge.

Pakistan has been receiving foreign aid from several countries, especially the Gulf. The United Arab Emirates (UAE) and Turkey sent aid to Pakistan on Sunday.

On the other hand, organisations like the International Monetary Fund (IMF), the United Nations (UN), the World Bank, and the Asian Development Bank (ADB) assisted Islamabad with the aid of around 4.5 billion dollars.

The IMF board will decide this week on whether to release $1.2 billion as part of the seventh and eighth tranches of Pakistan’s bailout programme, which it entered in 2019, reported Reuters.

Reacting to the flood situation, Pakistan’s army general, Qamar Javed Bajwa, said it might take years for the country to recover.

Pakistan’s foreign minister, Bilawal Bhutto Zardari, has appealed to the world for more financial aid to tackle the devastating flood and its effects.

Before and after satellite images show destruction caused by Pakistan floods

When Pakistan Army mowed down 10,000 refugees heading for India in just a few hours

It was 4 PM and the sun was still beating down as Ershad Ali frantically searched for his father Chikon...

Novari Health-built platform aims to cut surgery wait times. During the pandemic, many hospitals have cancelled or postponed surgeries to...