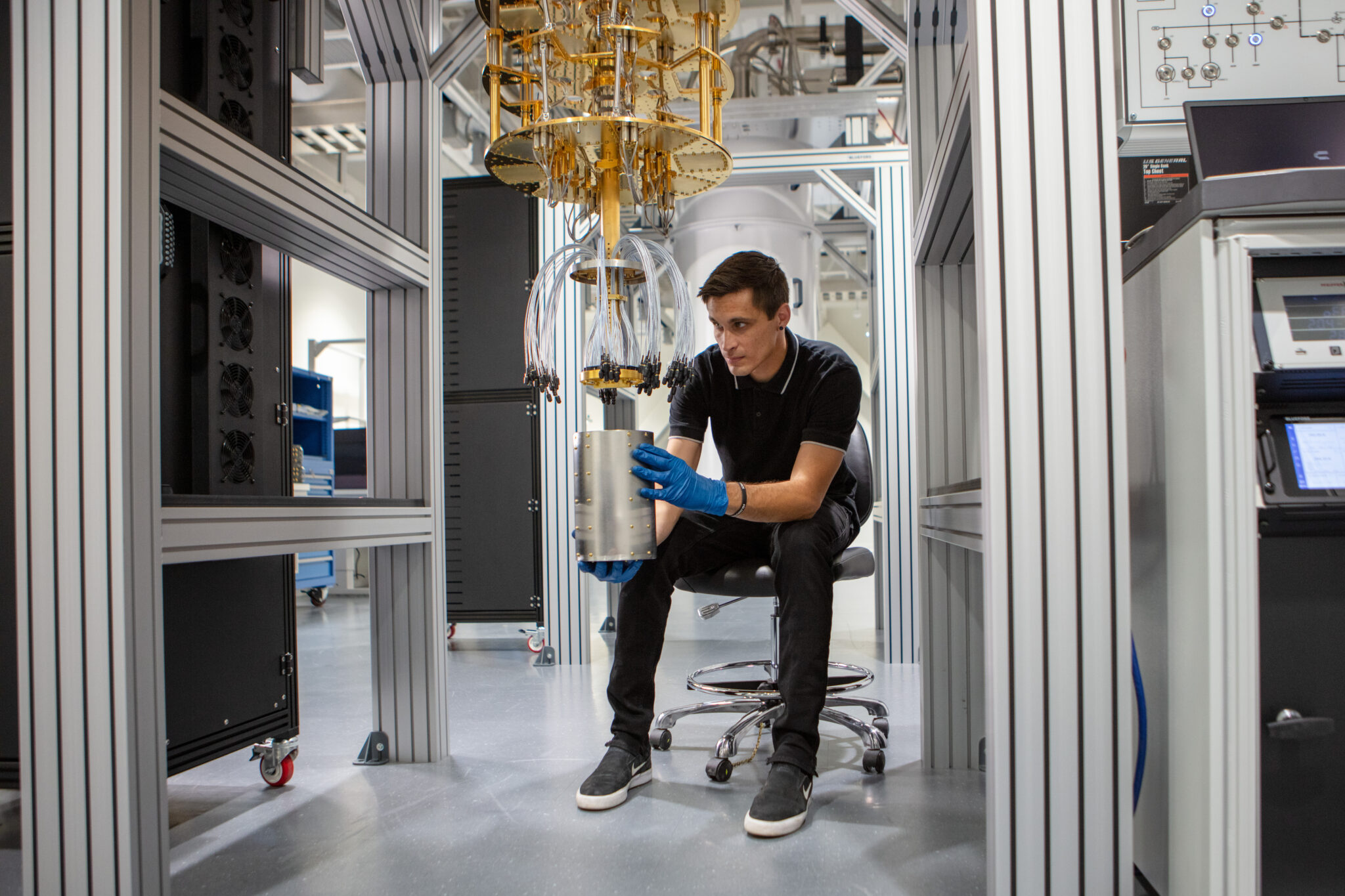 It’s been nearly two years since Amazon Web Services announced a quantum computing initiative that included the establishment of an AWS Center for Quantum Computing — and today AWS is opening the box, Schrödinger-style, to reveal that the center is alive and delving into quantum weirdness in a new building on Caltech’s campus in Pasadena, Calif.

“We’re in the building,” Painter, the AWS center’s head of quantum hardware, told GeekWire. “Our people have been working there, which has been great. Obviously, we would have been remote regardless, given the COVID [pandemic], but it’s been a really great time to come back and see each other, and celebrate this facility.”

The center will bring together AWS developers and academic researchers, not just from Caltech but from other institutions around the country, to solve problems standing in the way of a quantum computing revolution. Among the collaborators are researchers from the University of Washington, Stanford, MIT, Harvard and other computer science powerhouses.

“Our new facility includes everything we need to push the boundaries of quantum R&D, from making, testing and operating quantum processors, to innovating the processes for controlling quantum computers and the technologies that we’ll need to scale to support bigger quantum devices, like cryogenic cooling systems and wiring.” Nadia Carlsten, head of product for the AWS center, said in a blog post.

Quantum computing aims to take advantage of weird phenomena on the quantum scale that could address problems that are judged to be virtually unsolvable using classical computing’s binary, one-or-zero paradigm.

Like the dead-and-alive cat in Erwin Schrödinger’s famous thought experiment, quantum bits (also known as qubits) can be regarded as representing both ones and zeroes until they’re observed at the end of a calculation.

But there are huge challenges yet to be solved, with error correction leading the list. Whether the qubits are generated by superconducting circuits, trapped ions or photons, quantum states are typically so delicate that it’s possible for the qubits to be perturbed and misread. Reducing the error rates will be a requirement for many of the applications for quantum computers.

Researchers at the AWS center are looking at a hybrid approach that uses enhanced physical qubits — qubits that can represent not just ones and zeroes, but a wide range of values — as the building blocks for error-corrected logical qubits.

“From the theoretical analysis that we did, we saw that instead of requiring a few hundred thousand physical qubits for logical qubits, it could be a few thousand, and depending on the error rate, maybe a hundred or so,” said Fernando Brandão, a theoretical physicist at Caltech who is the AWS center’s head of quantum algorithms. “So you could have, in principle, substantial savings.”

The research done at Caltech will feed into Amazon Web Services’ in-house hardware development effort, and into its partnerships with IonQ, Rigetti and D-Wave Systems for the cloud-based Amazon Braket quantum computing service.

“We’ll continue to try to look for bringing new types of hardware to our customers, not just our own hardware that we develop internally, if we think it brings value to those customers,” Painter said. “And at this stage, it certainly does.”

For now, AWS is building its qubits out of superconducting circuits.

“We chose this approach partly because the ability to manufacture these qubits using well-understood microelectronic fabrication techniques makes it possible to make many qubits in a repeatable way, and gives us more control as we start scaling up the number of qubits,” Carlsten said.

AWS is by no means the only big tech company probing the frontiers of quantum computing. Microsoft, Google, IBM and Intel are also vying for quantum supremacy, and sometimes making competing claims.

“There’s a good, healthy debate about the performance of quantum computers, because they’re so new that we’re still trying to understand how to calibrate your performance,” Painter said. “One really great thing about academia is that there’s a peer-review process almost naturally occurring, where the most important thing is what’s really true, and what’s the gain in knowledge.”

He pointed to AWS’s involvement in OpenQASM, an open-source programming standardization effort, as an example where the major players are working together to further the cause of quantum computing.

Like a true academic, Painter is reluctant to predict when the quantum computing revolution will reach its peak.

“We typically don’t talk about details of the roadmap, but let me give you a sense for a time scale that I think is pretty realistic,” he said. “I think within the next few years, you’ll start to see small error-correcting computers.”

Painter said such devices, consisting of only a few logical qubits, would focus a brighter spotlight on quantum computing. “That’s going to be a big breakthrough,” he said, “because it really defines a whole new paradigm that people will be pursuing, and could rapidly increase the rate at which we can develop the high-value quantum computers that can tackle high-value problems. … It’s still a decade of effort, but this decade is going to be very, very exciting.”

This article was originally published by Geekwire.com. Read the original article here.