Google today announced its new Pixel 7 and the Pixel 7 Pro smartphones at a hardware event in Brooklyn. While the company focused a lot on the security, voice, and camera features of the phone, it also briefly showed a new health feature in a slide: coughing and snoring detection.

On a daily bedtime summary screen, the Pixel shows you how long you snored and how many times you coughed while sleeping. 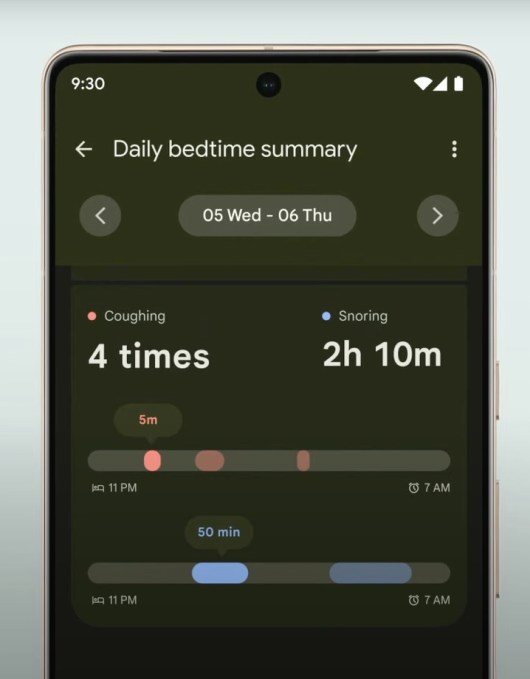 “With your permission, digital well-being can help you understand the quality of sleep by analyzing the audio from coughs and snores during the night. The processing happens right on your Pixel 7,” an exec said during the presentation.

App researcher Mishaal Rahman had earlier posted the setup screen for this feature late last month, ahead the official Pixel launch. The screen notes that the feature uses Pixel 7’s microphone without recording or sharing data with anyone.

According to a Google support page, you can enable this feature from the Bedtime section of the clock app, and check your data under that section as well. An alternative way to access this data is to go to Settings > Digital Wellbeing and parental controls > Show cough & snore activity.

It’s not clear if the feature will be available out of the box or will be rolled out as an update later. We have reached out to Google to know more, and we’ll update the story if we hear back.